Dispatches from the Uncanny Valley 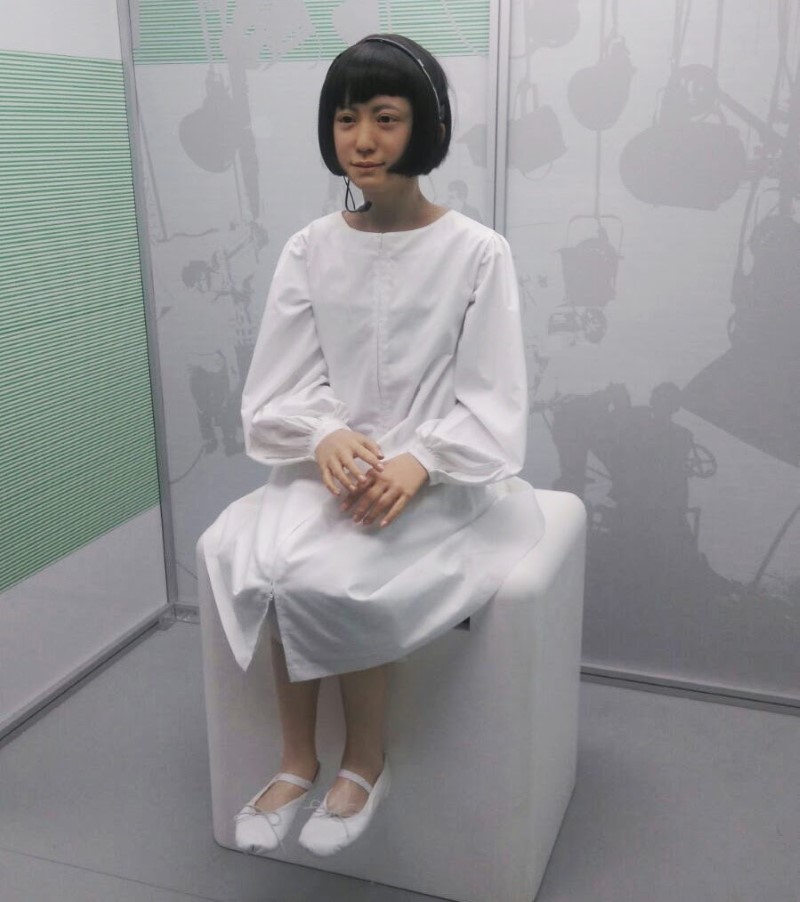 As I stood before the seated figure, my stomach turned. Every part of my brain was screaming that the face before me was alien. It looked so lifelike. So much like a human. Then it moved and everything felt wrong. I moved on from the robot to the next exhibit, trying to shake the odd feeling those semi-lifelike eyes had given me.

This robot was featured in a fascinating Science Museum exhibition that details the cultural history of robotics. It was the Kodomoroid communication android that weirded me out. The combination almost realistic skin, blank expressions and slight movements gave me physical chills. The feeling I encountered was a strong example of the uncanny valley. By its nature, it is an uncomfortable feeling. Your instincts are to avoid the almost-human. Yet increasingly we find this feeling in the media we consume. It recurs again and again in computer games, in movies and in all culture around us. We have entered the valley and there is a long climb out of it. The robot I saw at the exhibition was just the latest example of a trend that has reached fever pitch in recent years.

In computer games, we see the same trend repeated. A quest for greater and greater photorealism in graphics has led to a problem where characters don’t feel life-like. It is near impossible to create humans in graphics that are indistinguishable from a video, although that had been the aim for some time. In films as well, CGI characters have overtaken everything, to varying degrees of success. We’re stuck in the valley. The problem is that a fully realistic artificial portrayal of a human is near impossible. There are too many factors to consider: slight movements of the eyes, micro-expressions, blushing and empathetic gestures to name a few. One of the issues the exhibition highlighted was that in creating realistic robots, we need a better understanding of the humans. We need to research our own movements and expressions so we can better relate to the machines we are creating.

It was clear from the exhibition that robotics have a long way to go. We are nowhere near the sentient replicants of Blade Runner that are indistinguishable from humans. Most of the lifelike representations of humans fall solidly into the uncanny valley, giving people the creeps. It is hard to trust something that instinctually feels wrong. They are limited in function and somewhat basic. The advances in future years will likely be in combining several existing technologies, but the uncanny valley is a hard problem to overcome.

One of the ways around the problem is to simply the design, turn characters into more stylised figures. Some of the robots in the exhibition did this, with exaggerated eyes or simplified expressions. But the quest for perfect human simulation still continues. Why, if the effect is so creepy and unsettling? Perhaps because people want to climb out of the valley and get close to realism as possible. However, I think this desire is fueled by our culture, specifically science fiction. After all, the culture and stories we tell directly influence the technology that is made. Just look at Star Trek and how much influence it has on technology and scientists working today. Dreams created in fiction have a direct influence on reality. We are always going to try to vault the uncanny valley because our fiction tells of realistic robots, androids indistinguishable from humans. Of course, we are striving for perfect simulations of humans in our art and in robotics because the idea has been all-pervasive in our culture for hundreds of years, ever since Frankenstein. The culture influences the technology we are creating because the story is so powerful.

I believe it’s not just a one-way street, however. Why this all matters is I think it is a feedback loop. The culture influences technology, which influences different culture and so on. So if we’re stuck in the uncanny valley, the overall feeling is going to be one of revulsion. If you are continually repulsed by human representations in the culture and robots that surround you, then it is difficult to feel empathy. Perhaps this lack of empathy spreads to your fellow human beings.

After the exhibition, I rewatched the film A.I, which perfectly encapsulates the feelings of horror and disgust we feel when presented with almost humans. In the film, the discarded robot David is taken to a fair when robots are brutally destroyed in horrific ways for a cheering crowd. It shows the lack of empathy and repulsion we feel when presented with alien representations of humans. It also shows the danger of lingering in the valley for too long. The robots are shown as caring, but the crowd cheers as they are ripped apart. Living in the uncanny valley means surrendering empathy. It can conceivably be extended out to other human beings as well if we stay within the uncanny valley.

It’s a dangerous place to be. We need to create stories that generate empathy to counteract the uncanny valley effect. There won’t be realistic robots for decades yes, nor will there be realistic simulations of humans in games and films for some time. People are going to strive towards realism for longer. We’re stuck in the valley and we need ways of countering it.

Battle of the Ages in the Election »