'With us or against us': Brexit and The Daily Mail

So I was going to write about something else entirely, but then the I stumbled on The Daily Mail on Twitter. I try to avoid it when I can because it is always a hate-filled rag, but I couldn’t avoid it. Today it published this front page: 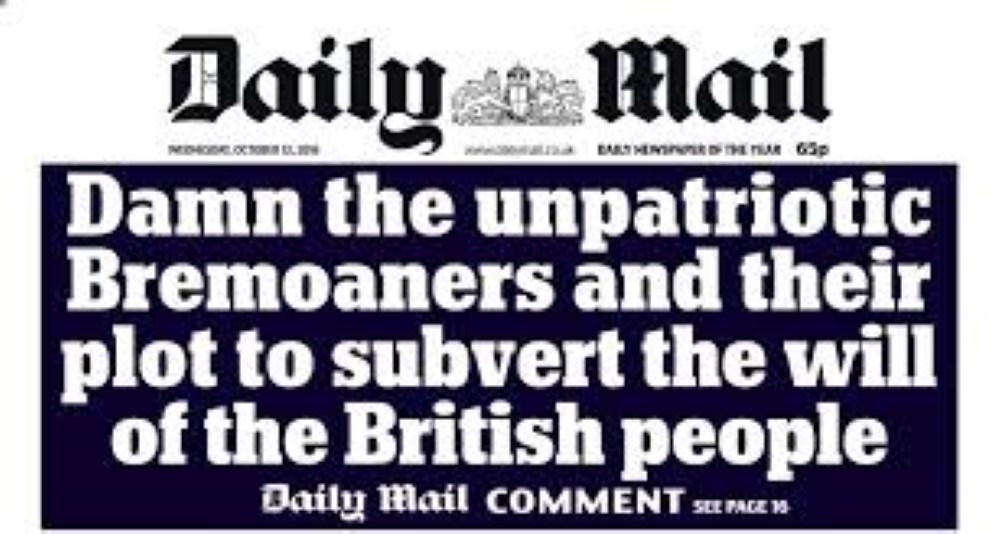 It brings to the surface a lot of feelings that have been brewing in this country recently. It’s also widely inaccurate and scary. Everyone has accepted Brexit is going to happen, it’s just a case of how badly it is going to hurt the country. Front page spreads like this only serve to divide us when we need to be most united.

Firstly, it casts Brexit as an overwhelming will of the people, rather than a slight majority. Before the election, Nigel Farage was saying a 52% majority would not be enough to claim victory. But months later, it is being used by the Tory party as an overwhelming mandate to remove rights and exit completely from all trade deals. But nevertheless, the referendum was passed to exit the EU. The article says:

The entirely fatuous argument…is that the public did not vote to quit the single market on June 23: they voted only to leave the EU.
In fact, what the public voted for was simple: to regain control of our borders in order to end mass immigration; reclaim control of our laws; and stop sending billions of pounds to Brussels.>

It’s speculation based on limited evidence. It’s dangerous to assume that everyone who voted leave did so for the same reasons. Not everyone voted to end mass immigration. There are hundreds of reasons why someone would have voted leave which The Daily Mail conveniently ignores. And obviously, The Mail is wrong on this point. The public did not explicitly vote for any of those reasons because they were not on the ballot. The only question asked was about Britain’s membership of the EU, not their reasoning behind them.

The second issue (among many) is that is casting all remain voters in the same barrel. In the same way apparently everyone who voted leave is exactly the same. They are:

Again, it ignores the complexity of the various reasons why people voted they way they did. If there was a larger majority, sure, you could point to a minority that are sore losers. But it wasn’t just a small minority of liberal elite who somehow rule the world, it was 48% of the vote. 48%! That’s millions of people who are involved in the liberal elite that are somehow plotting to overthrow the ordinary voter. It’s clear because many do not agree with the hardline stance the government is taking,* The Daily Mail* is casting them all as enemies, saying there are simply two sides. The virtuous ordinary voter who is being undermined by a shady cabal of sinister liberals.

Brexit is a stupidly complex issue. It will take years to negotiate and that’s if everyone is being clear and trying to work it out. Those who have accepted it are just trying to get the best deal for the country and for it’s people. It’s like knowing your ship is heading towards an iceberg and trying to minimise casualties. There are so many different issues at play. The fallout is going to be severe for the NHS, for human rights, for environmental issues, for those who live and work in the UK who originate from the EU. The list goes on. We need open, honest discussion about the issues involved, not silencing of free speech. The only way we are going to get through unscathed is to debate each and every issue.

Which brings me to my main concern about front pages like this. They divide the world into winners and losers. Its the same rhetoric that George W. Bush used in the Iraq war. You’re either with us or against us. There is no debate to be had, no issues to iron out. Just clear action to be taken. And if you don’t agree with it, then you must be against it. You must be unpatriotic or traitors. You deserve to be damned. If there is only right and wrong, no grey area, then those who oppose it must obviously be wrong. And therefore they must be silenced, or arrested or rounded up. Because they are against the will of the people. What The Daily Mail is doing is shutting down any debate about the future of the UK and saying those who oppose a ‘hard Brexit’ need to be silenced. That greatly worries me. In combination with the xenophobic rhetoric coming from the Conservative party at the moment, its a lurch towards the far right which is terrifying. There is an uneasy mood in the country at the moment. We do not need divisive rhetoric designed to silence one side of the debate.

« September Link Round up

'The Shock Doctrine' and the Modern World. »